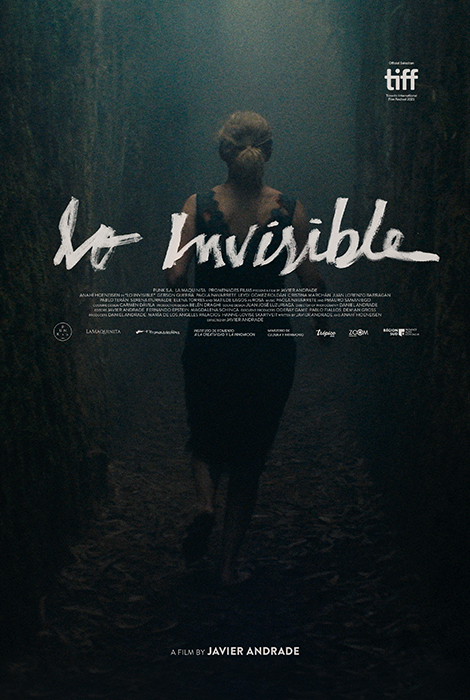 by Jacqueline and Jennifer Valencia

Jacqueline: The weeks of TIFF21 have been full. Full of work from home in the middle of the pandemic and finally sending my child to school again. Our intentions with covering TIFF this year were to review as much as we had time for in our regular day jobs. There was time and I’m very happy to have been given this opportunity as an independent writer to watch and write about new films. The greatest experience I’ve had at TIFF has been watching and reviewing films that people have barely heard about in the popular film spectrum. And I get it, there is so much film made every year that it would take an infinite amount of lifetimes to watch every good film that needs to be seen.

For this film, Critical Focus has decided to review and discuss Lo Invisible because of its treatment of a couple of subjects.

REVIEW: Andrade’s Lo Inivisible is a character study of a woman going through post-partum depression. Anahí Hoeneisen plays Luisa, a forty five year old mother who has just arrived home after a stint at a psychiatric ward for almost killing her newborn child. The camera follows Luisa finding her way through rooms in a daze of post-partum depression. Spaces are occupied by silence or the sounds of nature or housework around Luisa. Her team of servants take care of all of her needs, but even so Luisa is numb and can not understand how to exist in this world anymore.

Hoeneisen does a spectacular job as Luisa. Her emotions are rarely shown, but it is in her movements and voice that she emotes her confusion and despair. The camera revolves around her like a part of the crucial setting to her circumstances. The people around her flit and pass by like birds attending to their chores or roles, but it is Luisa that is the entire film. Hoeneisen does an impeccable job to make the audience feel the turmoil within when there is so much not really going on around her. Watching her fade and come into scenes feels tragic and electric all at once.

I had my sister and fellow Critical Focus writer, Jennifer watch this film. These are her reactions:

Jennifer: “I felt like this movie was unrealistic and unapproachable to me as a mother because while the actress’ portrayal PPD is fairly realistic her life as a rich woaen who has servants to take care of her child is not. A lot of women go through PPD or some sort of depression, anxiety, or transformation after having children, which can be difficult. The changes a women goes through after having children, both emotionally, physically, and mentally are often difficult to go through. You are forever changed and your life is forever changed. You must grapple with living in a new body, with new responsibilities, and the changes in your life, all while taking care of a newborn child. Luisa is this film is struggling with PPD, but she does not have to take care of her child. In one of the early scenes when she gets home she takes a shower and gets ready. She walks out the door and gets in the car. She did not have to consider the baby, she didn’t even have to take the baby. Women with PPD or the baby blues must suffer through it and still take care of her child. She must take her child wherever she goes. Luisa does nothing all day and everyone just does things for her. She does not take the time to try and get better and no one helps her. They just watch her and act like she will break at any minute.

It made me angry. After having both my kids I struggled with adjustment. I struggled with being home with the kids on my own and not having anyone to help me. I did a lot of the things on my own. I had to seek out help both for me and my kids. I do not have the luxury of having a nanny or a wet nurse. I had to nurse my kids and I wasn’t a big fan of it.

This film reinstates the class structures that exist in Latin America where the white Latine people are rich and their servants are darker skin. It would have been nicer to see someone of colour as the lead character. Maybe even a mixed raced family.

This also makes the film less tangible to the average person. Not only are they rich and she does not actually mother her child, but she is also white.

I am tired of this narrative. It is old and outdated.”


Jacqueline: No matter the economic situation of a woman, every woman experiences postpartum depression and handles/tries to deal with it differently, if they can. Everyone experiences depression differently. Full disclosure, I’ve experienced postpartum depression after having my second child. In Lo Invisible, Luisa displays an extreme numbness to the world around her and can not connect with her child. Her suicidal ideation and her tendency to want to destroy everything around her is very relatable. Depression in general has no rules about how to deal with it morally or ethically. It’s just a thing that makes you do things or want to just erase yourself from everything, even the periphery of the world.

In Luisa’s case, she arrives from the psyche ward seeking something every time she wakes up. She goes for a run while her servants attend to her child. And when she does try to go to her child, it is an event fraught with fear and despair. She doesn’t know how she fits in her surroundings anymore and this is key to my next point and to my backing Jennifer’s points.

It is extremely hard to relate to a white character that has a team of Native and foreign Latine servants that mind her child. The fact is, she is given all this space to rest and improve. She has a wet nurse, a nanny she’s had as a child that still attends to her. In fact, when she confronts her oldest son’s piano teacher for having an affair with her husband, she lists out to her all of her servants: where they’re from and how long they’ve been loyal to her, that’s when I kind of flipped my lid. Luisa, with the blonde hair and white European looks, crediting her servants for being loyal to her, to show the piano teacher that she is totally out of line with how things are supposed to work.

There are scenes with the servants, but the servants are part of her setting. Luisa uses and abuses her power around them. At one point she does stop her lifelong nanny to cry to her and ask her if she’s a good person. Of course, her servant says of course and not to worry. Otherwise, Luisa is trying to find herself again in the usefulness of her servants. The driver is instructed to follow Luisa on her runs. On one occasion, Luisa attempts to have sex with the driver. He stops her. And then the event is dismissed. Luisa goes on to her every day of existing in the house, sometimes hearing the baby cry, and attending parties in her home.

The first party she celebrates by grabbing wine and having fun with her best friend. It is alluded that Luisa might have a drinking issue, but it is glossed over. The focus is Luisa’s inability to do anything other than run, sit, look at her body in the mirror, and manage the servants. At one point, one of the help comes to ask her what she would like the family dinner to be, for she has not attended to these things for a while. She tells the servant to grab some money from her purse and to order a pizza.

The husband then comes home and complains if they don’t make food in the house anymore. Pizza?

I’m sorry. It’s hard to relate to a story set in the grandiose home of well to do people and empathize with this woman’s situation. It’s a situation that is very valid and anyone in any class or race can relate to. However, would have Luisa story hit better if it was the wet nurse who had been going through postpartum? How would her story been treated? I think of stories like Barbara Loden’s Wanda, when I start to think like this about Lo Invisible.

In Wanda, Barbara Loden’s character is a working class woman who just gives her kids away to her husband. She finds no meaning in being a mother and no meaning in her past marriage. She is said to abandon her kids, but in reality, she has nothing she can give as a mother. Whether that’s from postpartum or existentialism, that’s for the audience to decide. For me, Loden’s character leaves her kids because there’s a numbness to the world around her, much like Luisa’s empty world. Despite having a village, which many mothers don’t have nowadays, to help her with her postpartum and to connect with her child, Luisa just cannot. I think that’s the part that redeems the film’s story to me.

Luisa’s concern about the loyalty of her help, however, suspiciously darker skinned servants, is what hits hard in this film. There is a complete lack of statement about class, caste, and race in Latin America that is not even mentioned here. In the last frames, Luisa runs into the forest, a party in her home, where no one notes her absence continues. Luisa fades into the ether while her lifelong loyal nanny sings a lullaby in her room. It seems she’s the only one searching for her.

I think it’s mostly hard right now in a changing world for the stories of the rich and white to be the only ones in the spotlight, especially in Latin America. Jennifer and I are mixed race women & mothers of Colombian parents. Our mother worked as a cleaning lady for a while, as did I. I am familiar with servitude and loyalty. I am familiar with class and caste because of our skin colour. This is why I wish more was said in Lo Invisible, beyond Luisa. Her story and portrayal is so incredibly important, especially since it can be misunderstood in Latin American cultures. I stress cultures because although we all speak the same language, we are not one people. This film accentuates that fact. I think it would have been strengthened with more fleshing out of the world that serves Luisa’s privilege. This isn’t “wokeness” talking, it’s time for new stories and better focus if we’re going to be talking about women’s suffering.